Unlike the near perfect flight of Apollo 4, Apollo 6 experienced problems right from the start. Two minutes into the flight, the rocket experienced severe Pogo oscillations for about 30 seconds. George Mueller explained the cause to a congressional hearing:

Now, in turn, the engine is fed through a pipe that takes the fuel out of the tanks and feeds it into the engine. That pipe's length is something like an organ pipe so it has a certain resonant frequency of its own and it really turns out that it will oscillate just like an organ pipe does.

The structure of the vehicle is much like a tuning fork, so if you strike it right, it will oscillate up and down longitudinally. In a gross sense it is the interaction between the various frequencies that causes the vehicle to oscillate.

In part due to the pogo, the spacecraft adaptor that attached the CSM and mockup of the Lunar Module to the rocket started to have some structural problems. Air borne cameras recorded several pieces falling off it at T +133.

After the first stage was jettisoned at the end of its task, the S-II second stage began to experience its own problems. Engine Number Two (it had five) had performance problems from 206 to 319 seconds after liftoff and then at 412 seconds shut down all together. Then two seconds later Engine Number Three shut down as well. The onboard computer was able to compensate and the stage burned for 58 more seconds than normal. Even so the S-IVB third stage also had to burn for 29 seconds longer than usual.

The cause of the pogo during the first stage of the flight was well known. However, it had been thought that the rocket had been 'detuned'. To further detune the rocket, it was decided to fill the cavities with helium gas.

The failure of the two engines in the second stage was traced to the rupturing of a fuel line that fed the engine igniters. The ignitor was essentially a miniature rocket motor mounted in the wall of the J-2 engine's pressure chamber. It was fed by small-diameter flexible lines carrying liquid hydrogen and liquid oxygen. During the S-II second stage burn, the hydrogen line feeding the engine number three ignitor broke due to vibration. As a result, the igniter fed pure liquid oxygen into the pressure chamber. Normally the J-2 engine burns a hydrogen-rich mixture to keep temperature down. The liquid oxygen flow caused a much higher temperature locally and eventually the pressure chamber failed. The sudden drop in pressure was detected and caused a shutdown command to be issued. Unfortunately, the shutdown command signal for engine three was cross-wired to engine two. Engine two shut down and in turn its pressure sensor sent a shutdown signal back to engine three.

The problem in the ignitor fuel lines was not detected during ground testing because a stainless steel mesh covering the fuel line became saturated with liquid air due to the extreme cold of the liquid hydrogen flowing through it. The liquid air damped a vibration mode that became evident when tests were conducted in a vacuum after the Apollo 6 flight. This was also a simple fix, involving replacing the flexible bellows section where the break occurred with a loop of stainless steel pipe. The S-IVB used the same J-2 engine design as the S-II and so it was decided that an ignitor line problem had also stopped the third stage from reigniting in Earth orbit. 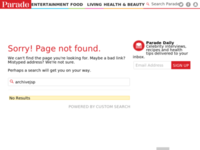 © 2013 Parade Publications Inc. All rights reserved. Use of this Site constitutes acceptance of our User Agreement (updated 3/14/2012) and Privacy Policy (updated 3/14/2012) Your California Privacy Rights The material on this site may not be reproduced, distributed, transmitted, cached or otherwise used, except with the prior written permission of Parade Publications. Ad Choices // archive.parade.com
Take A Ride In Space 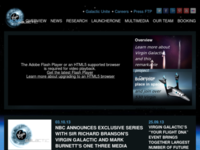 Overview Booking 03.10.13 . More 25.09.13 05.09.13 18.07.13 All news The Virgin Galactic vehicles are designed and built with revolutionary but proven technology. More At the heart of our vehicles' design, safety will be engrained in the culture of our space line operation. More New Mexico will be the home of the world's first purpose built commercial spaceport, now under construction. More A revolutionary new launch vehicle. More Site built by Outside Line For all press and image requests you can visit our Press FTP where you can find all our available images and press releases ready to download. // Дальше — www.virgingalactic.com 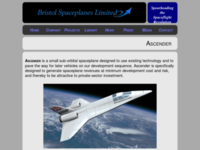 Ascender   Ascender is a small sub-orbital spaceplane designed to use existing technology and to pave the way for later vehicles on our development sequence. Ascender is specifically designed to generate spaceplane revenues at minimum development cost and risk, and thereby to be attractive to private-sector investment. Ascender carries one pilot and one passenger or experiment. The passenger remains strapped in his/her seat during the flight. Ascender takes off from an ordinary airfield using its turbo-fan engine and climbs at subsonic speed to a height of 8 km. // Дальше — www.bristolspaceplanes.com 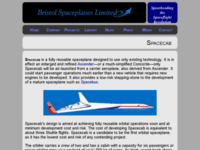 Spacecab   Spacecab is a fully reusable spaceplane designed to use only existing technology. It is in effect an enlarged and refined Ascender—or a much-simplified Concorde—only Spacecab will be air-launched from a carrier aeroplane, also derived from Ascender. It could start passenger operations much earlier than a new vehicle that requires new engines to be developed. It also provides a low-risk stepping-stone to the development of a mature spaceplane such as Spacebus. Spacecab's design is aimed at achieving fully reusable orbital operations soon and at minimum development cost and risk. // Дальше — www.bristolspaceplanes.com